What's on your mind?

There's been a lot of vandalism on pages, while it is funny to read it is very annoying to people like me who really enjoy writing and maintaining pages since it can take hours to write out a new page.

Go to desktop/laptop wiki, click the three vertical dots next to edit on a vandalised page, click history, a history of alterations to the page will show up, find the previous correct page before the vandal edits the page, click the (Cur) at the start of that page you want to return it to, this brings up the difference between the two pages, on the current page you will see a button (Undo), click this and it will flip the pages around to change the vandalism back to its original page, finally scroll to the bottom and click save changes.

This will return the page to its original state.

VANDAL ACCOUNTS ARE ALMOST ALWAYS IP ADDRESSES WITH NO ACCOUNT.

YOU MUST KEEP AND EYE OUT FOR THEM AS THEY ONLY APPEAR AS "WIKI USER".

Have a good day.

I have a few questions before I start to watch this show, to make sure to avoid some things.

1.Does this show have time travel/prophecies, magic spells or OP characters?

2.Does this show have alot of plot errors?

3.Does this show have alot of unanswered questions or is the pacing regarding mystery pretty quick?, going off that is this show full of filler?

4.Are the villains pretty effective or are they pretty pointless?

5.Is there some action(fight scenes) between the characters?

The finale of this series felt very rushed and had little time on some character developments. The beginning felt very disjointed as characters went off on their own thing and went on separate missions.

There were many questionable decisions such as Diana's treatment of Satu. Let's not forget that Diana killed Benjamin and agreed that Knox "deserved death". I know these people did serious offences but no one deserves death. What sort of message does that send out to viewers? And we are rooting for her?

I don't know who is the witch with the blood of the lion and wolf. I wasn't hooked on the idea that Diana could have the power to reborn all creatures/end creatures of the night or create life. I haven't seen the full powers and extent of Diana's magic as it is made out to be an amazing thing in season 1.

Benjamin Fuchs was made out to be a large threat but he didn't do much apart from take Matthew and mess with Jack in the past(which was way more interesting). I wanted a better interaction with him and Diana as they met each other in 1591.

Despite the severity and seriousness of breaking the Covenant mentioned in season 1, Diana had no consequences for her actions.

We still don't really know what the twins are.

The end mentioned a great battle that was beaten despite no great struggle or physical fight. The member of the congregation almost instantly agreed to Diana's terms and revoke a 900 year Covenant though there was a slight division.

I was hoping for drama with the fact that Diana's friend Gillian who was killed/or not by Matthew would be addressed as this would be an interesting part to their dynamic.

We were told that Knox was tracking down Diana's movement but then D just goes out in the open risking exposure. The fact that all beings are created by daemons is bizarre and the first few episodes were giving the impression that they would create a cure but otherwise what is the point of those scenes not all humans will harm Creatures?

I really enjoyed season 1 as there was this mystery of the Book of Life, the magical capabilities of Diana and the long lasting Congregation and their backstory. The Book was summed up briefly at the end which seemed like a downgrade, we didn't see much of Diana's powers (and the 10th Knot wasn't as grand as I expected) and the congregation is played as some pathetic incompetent government who are unable to capture a witch.

I did like Chris and Miriam they were very interesting(especially near the end) but until the last two episodes everything was monotonous and steady and slow and no tense or exciting moments.

I would love to hear what you think and whether it you think it was as good or better than other seasons - or NOT.

Thanks for reading! (just had to rant it out!)

Anyone else thinks that declaremont familiy is bad explorerd on series ,ex i miss vernin in the series

Who is the better phoepe

I read the trilogy quite a while ago, so many of the details are hazy. I'm watching the show and just finished season 2 episode 6. I have a few questions that I'm hoping someone can answer!

When Diana and Matthew travel back in time what happened to the Matthew of that timeline?

If Diana ended up messing with the witch coven map,why didn't she also give Philippe clues to help him avoid death?

Yeah so I've watch about 5 episodes and I haven't seen a vampire that fits this bill yet. I mean Matthew? Come on! Seriously? Definitely not "preternatural beauty". Barely even meh attractive.

Also I read that their skin is so strong that a wooden stake couldn't penetrate it but ANY type of bullet can? Sounds contradictory to me.

I love vampire lore and this is just too weird... it reminds of the terribleness of Twilight. At least these vamps don't sparkle in the sun! And please don't get me wrong- these vamps are WAAAAAAY better than Twilight vamps imo.

Does anyone know why they avoid the blood of certain animals like wolves, horses or dogs?

I'm currently listening to the audiobooks (saviors in the LA traffic I have to face everyday), but I don't have the actual books to look this up in. They refer to vampires as something else starting with an "M" especially when then go back in time to 1590, before the word Vampire is a thing. Mon ja song? Does anyone have the books that can confirm what this word is? I'm intrigued and want to look it up, but google is not helpful since I don't know how it's spelled! Thanks!

In a discovery of witches the book, Martha gives Diana a tea and it appears to make her not be able to have a child. Am I incorrect about that description if so what does the tea do, if not is there anything like that IRL?

I am in the U.S. and have just watched S2E5, which I found to be very disappointing, so much wasted opportunity to bring back the heart and soul of this story, which frankly has been missing for most of this season. Season 2 should have had 3 main plot points: 1. Diana's training 2. Diana and Matthew's relationship with Philippe and 3. The search for Ashmole 782.

Episode 5 gave us only mere moments related to one of those plot points, Phillipe. He is mesmerizing on screen, but our time with him was reduced in favor of showing 20 minutes of travel time getting to Sept Tours. I counted six scenes of nothing but horseback riding (4 getting to Sept Tours, 2 after arriving) in this episode. Why? And then there is the continuation of the Kit jealousy saga and the introduction of Louisa, to be his partner in crime. This sub plot does nothing to add value. Choosing to give them scenes instead of bringing more depth to the Phillipe/Matthew/Diana relationship is truly heartbreaking. And let's don't forget to mention Gallowglass, although it seems the writers have. I am hoping he will have a more prominent place in future episodes/next season but thus far his time in front of the camera has been short.

Looking back, this season has had some fantastic scenes but why are they so short? It seems the scenes are switching every 2 minutes! It feels like attention deficit disorder. Please give us more time with each scene. Trying to capture these complex relationships needs more focus.

I hope Season 3 reduces the noise (unnecessary sub plots) and gives us more time in each scene, bringing true value and depth to the characters' journey.

Hey guys I’m new to this wiki seen the first season when it first aired and didn’t realise there was a wiki for it but I have a small question when it comes to editing pages what’s the go with powers and abilities is that only for Diana and Satu Järvinen pages or will we be adding them for all witch and vampire and it just hasn’t been done yet ?

We already have the first episode of S2! We wait too long for this return. 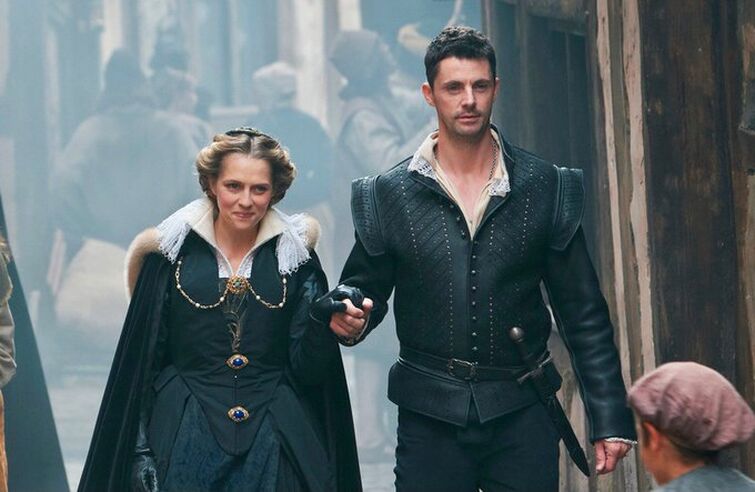 What did you think of the episode? was it worth the wait? I'm still very satisfied with the interpretation of Teresa and Matthew

PD:Looking for information on the second season I came across this wiki so congratulations to the administrators.

A Discovery of Witches Season 2

Do someone else beside me got interest in this character. why so small is covered close to even nothing. ??

What does it take to sire vampires since they are not able to do it in season 1? I haven't read the books, is the answer provided there?

Also, why does Diana wear a ring? Is it simply because the actress didn't take hers off? Thanks in advance

you need to improve everyone's page or information

A Discovery of Witches Fashiontumblr

112 Best A Discovery of Witches images | A discovery of witches, Discovery, All soulsPinterest