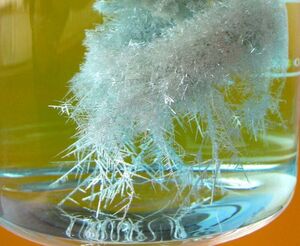 Diana's Tree (Latin: Arbor Diana or Dianae), also known as the Philosopher's Tree (Arbor Philosophorum), is a dendritic amalgam of crystallized silver, obtained from mercury in a solution of silver nitrate; so-called by the alchemists, among whom "Diana" stood for silver. The arborescence of this amalgam, which even included fruit-like forms on its branches, led pre-modern chemical philosophers to theorize the existence of life in the kingdom of minerals.

In Shadow of Night, Diana and Mary, The Countess of Pembroke, create an Arbor Dianae. When Diana added a few drops of her own blood, the tree appeared to become a living tree. When Matthew added his blood as well, the tree began to bear fruit.

Retrieved from "https://allsoulstrilogy.fandom.com/wiki/Arbor_Dianae?oldid=6302"
Community content is available under CC-BY-SA unless otherwise noted.