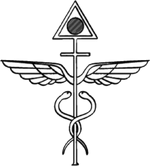 Daemons are one of the four types of species in the world in the All Souls series, next to humans, witches, and vampires. The origins of daemons are clouded in mystery. Daemons display a high creative capacity, and are known for their extremely free form thoughts and ideas, but live a relatively regular "human" life-span. Daemons run the risk of being branded "mad" or "insane" due to their tendency for their strange and high levels of eccentricity. Certain gifted daemons, know as moonkissed, have the ability to experience premonitions.

Daemons are searchers, always longing to find their own kind. They live in their vibrant imaginations and appear quirky to outsiders. They do not follow fashion trends, they create them. Daemons find rules boring and unnecessary and are often on the experimental edge of culture. When it comes to their favourite interests, they can focus more intensely than anyone and they are sometimes gifted with prophetic visions of the future.

As such, daemons are creative, artistic creatures who walk a tightrope between madness and genius. They live life in a chaotic fashion yet show great affection for those around them who share their ideals. Their stronger distinguishing characteristic is awe-inspiring creativity. They are exceptionally talented and often have a love for music and art; they can also be wildly unstable, however, and toggle between bursts of wildly productive activity and dangerous depressions. By turns dreamy and intense, decrial daemons live the same ordinary life span as witches and humans but with such intensity and so little sleep that they seem to live several lifetimes in one.

Naturally gifted and unpredictable, daemons tend to exhibit their traits at puberty in one of two ways: extraordinary mental and/or creative abilities or madness. Teenage daemons are at great risk of harm from drug abuse, homelessness, and aggressive mental health treatments. And because they are often born to perfectly ordinary families, they can be unwelcome in their biological families, marginalized and misunderstood. In those rare cares where they are born to understanding families who nurture their tremendous gifts, daemons can be unusually stable and competent, and go on to accomplish remarkable things.

Daemons are a link between humans and creatures due to their extra chromosome: 23 pairs+1 (where vampires and witches have 24).

Unlike vampires, daemons do not have any particular scent that is detectable to witches. Some witches, however, report that the gaze of a daemon is unsettling, and feels like a kiss or being nudged by an unseen force. Many daemons possess glimmerings of supernatural power. Although they cannot enchant objects as witches do, some report precognitive visions of the future and the ability to read the minds of others; these daemons are known as the "moonkissed". Though these readings and visions, like daemons themselves, are not always reliable.

Daemons struggle with repetitive tasks like housekeeping and, in their distraction, lose things constantly (such as keys, wallets, spectacles and cell phones); they often wander around parking garages for hours in search of their vehicles. Many daemons are fantastic chefs, but their kitchens are in constant disarray. A large majority of them are impeccably dressed, but some can seem scruffy or casual. They may let personal hygiene take a decided in moments of their inspiration/or madness, and have inadvertently started popular fashion trends (such as the lumbersexual beard, and mismatched socks).

Sarah Bishop claims that daemons are either rock stars or serial killers; though this is overly simplistic, this assessment contains a kernel of truth. Because daemons are brilliant and intensely creative creatures, they do gravitate towards high-risk/high-reward careers like pop music. They are also found in professions as diverse as computer programming and gaming, hedge-fund management, music, theater, and the graphic arts. Many of the world's foremost playwrights and authors - both past and present - are daemons. In modern times, daemons frequently appear on the bestseller lists. Many, if not most, artists - both creatively and performing - are daemons. And the individuals who surround these are artists (including actors' entourages, paparazzi, and various groupies) are often young daemons, drawn like moths to a flame.

Many daemons walk the halls of colleges and universities around the globe, though given the nature of daemons, those institutions cannot always contain them tidily. Historically, they were drawn to study mathematics, alchemy, and astronomy. Their scholarship and contributions were especially prolific throughout the eighteenth century, during the period popularly known as "the Enlightenment". Today daemons continue to make contributions in areas ranging from biology to history. They are particularly drawn to the creative possibilities of multidisciplinary fields, such as the history of science and computational bioinformatics (which develops software tools to analyze biological data).

There is a darker side to daemons. While serial killing is not exactly a profession, it is true that the genius of some daemons can spin toward madness and even, in a few regrettable instances, murder. More often, however, young daemons engage in crimes of impulse and opportunity, like street brawling, petty thievery, or counting cards in casinos. Others who prefer to avoid crowds and the possibility of being physically attacked may engage in counterfeiting art-works and historical artifacts or the sophisticated and destructive enterprise of computer hacking. In general, however, daemons are more of a nuisance than a danger. This stands in sharp contrasts to vampires and humans, creatures who are truly lethal but seem to get much better press, perhaps due to their superficial charms and tremendous powers of deception. When it is possible to identify, channel, and cultivate their creativity, daemons can be valued members of society.