Farren Blackburn
Episode 4 is the fourth episode of the second season of A Discovery of Witches. It is also the twelfth episode overall in the series.

Marcus tracks down evidence of Matthew and Diana's journey to 1590 and is charmed in the process. Gerbert and Knox scheme together. Em secretly continues higher magic in spite of Sarah's worries.[2]

In the present day, a man is riding his bicycle through the streets of Oxford, England. He eventually locks up his bike and just as he’s walking away, he hears a noise behind him. A second noise is heard shortly thereafter; this time much louder, which makes the young man jump. He starts to walk away quickly, but seemingly out of nowhere an unknown vampire lunges at him and brutally murders the young man. Later, the cops are on the scene, and a police detective makes a call to Domenico; alerting him of another killing done by a vampire. Domenico hangs up and proceeds to call Gerbert to tell him that he believes Blood Rage is back.

News of this vicious murder spreads across London as Phoebe Taylor discusses the as of yet unsolved murder with a coworker. She meets Marcus Whitmore, who’s interested in buying Lot 42. When the two shake hands, Phoebe can’t hide her surprise, and Marcus quickly apologizes, saying he suffers from cold hands. Phoebe takes Marcus to her office. He flaunts his money around, telling her he’ll buy it for £200,000. First though, he sees the contents of it, which happens to be the miniature Elizabethan paintings of Matthew and Diana that were given to their adopted son Jack.

At Sept-Tours, Sarah and Emily are enjoying their food when Ysabeau walks into the dining room. Sarah remarks that Marthe’s nut loaf is incredible. Ysabeau explains that as head of the Knights of Lazarus, Marcus had Nathaniel Wilson monitor the internet for any evidence of Matthew and Diana in the past. What he found were some paintings of Matthew and Diana circa late 16th century, now being auctioned off in Oxford, England. The three women are seemingly glad to have proof that Matthew and Diana reached their destination in the past.

At the auction house in Oxford, Marcus successfully wins the two paintings, but at Phoebe’s suggestion, he bids £94,000. Later, when he’s signing all the legal paperwork, he tries to get Phoebe to pull some strings so that he doesn’t have to wait until the next day to have them in his possession. But she proceeds to tell him that they don’t take cash, and the items will go back into the vault until his payment clears.

Meanwhile, Peter Knox visits Gerbert and informs him that all three species (Daemons, Vampires and Witches) were at the Bishop House shortly before Matthew and Diana disappeared. They both realize they need to pool their resources and set out to work together to get their hands on The Book of Life. Once inside his home, Gerbert decides to share with Peter all the information he has of The Book of Life over a glass of wine. He goes on to say that some of that information dates back as far as the 13th century.

Elsewhere, at Marcus’ place, Agatha is visiting Nathaniel and Sophie, who are staying with Marcus until their baby is born. Marcus tells Nathaniel that he and and his family are welcome to stay as long as they’d like. If their daughter turns out to be a witch, the Congregation may come after them. Agatha says that Baldwin owes her a debt.

Meanwhile, Miriam Shephard is with Sophie, and after Marcus checks the latest lab results of her baby, they tell her that the baby’s heartbeat is a bit slow. It's nothing to worry about because it resolves on its own rather quickly. However, their plans need to change because they can’t risk a home birth. Sophie is apprehensive, fearing that the Congregation will step in and try and take her baby.

The next day, things hit a snag for everyone when the auction house is broken into during the night. With the security guard missing, the witches suspect it’s Peter Knox and his allies who are responsible. Ysabeau receives a message from Gerbert asking to meet and fearing he has eyes on the chateau already. She tells Em and Sarah to stay inside from now on. Frustrated, Sarah tells Em that if they are forced to stay here any longer, she will throw herself off the tower.

Later that night over dinner, Marcus tells Phoebe that the portraits were originally part of his family. He then reveals that while his grandmother is French, he has some American blood in him that dates to the days of the American Revolution. Marcus exhibits interest in her until Domenico shows up, prompting him to head up to the roof. Domenico feeds back what he knows about the blood rage and the murders currently rocking London. He tells Marcus to feed back anything he learns.

Back downstairs, Marcus returns to Phoebe and brushes aside her questions about the break-in, especially after what he’s just learned. Anyway, the pair continue to get along and end their date with a tender kiss. However, Phoebe tries looking Marcus up online and finds out he is invisible on social media, Phoebe is intrigued by his story and meets with him again.

This meeting eventually turns into so much more, as they wind up sleeping together. That evening, Phoebe sneaks downstairs and finds a blood bag in the fridge. She also finds a stack of old photos.

Frustrated, Phoebe tries to understand what’s going on. Marcus takes her out for a walk and admits that he’s a vampire. While she’s incredulous to begin with, he continues on and reveals everything about the three creature species. Predictably, Phoebe doesn’t believe him and decides to leave.

Gerbert and Ysabeau meet outside and discuss the current situation befalling both their houses. Gerbert wants to know exactly what Matthew and Diana are planning. He’s growing impatient and frustrated, something that’s made worse by the fact there’s a vampire on the loose. He propositions Ysabeau, asking to strike an allegiance, but she instead walks away and rejects his offer.

Baldwin arrives at Marcus' house and tells him Ysabeau wants to meet. Before that though, he proposes a change in leadership. Given Baldwin is a direct blood descendant to Philippe, he asks Marcus to turn the Knights over to him. However, Marcus refuses to do so for now.

At Sept-Tours, Ysabeau berates Marcus for revealing the truth about what he is to Phoebe. She tells him he needs to understand his responsibilities and takes him into an ancient room in the house. There, they have documents and artifacts dating back 900 years to the formation of the Knights.

Marcus decides not to look back though and wants to try and change things from the inside out. It turns out blood rage is in Ysabeau’s blood-line, meaning Matthew is fully afflicted with it. In turn, this also means Marcus is diseased too. Unfortunately if the truth of this comes out, it could be the end of their bloodline. 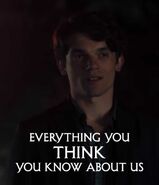 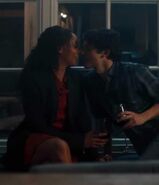 Retrieved from "https://allsoulstrilogy.fandom.com/wiki/Episode_4_(Season_2)?oldid=8542"
Community content is available under CC-BY-SA unless otherwise noted.