Farren Blackburn
Episode 7 is the seventh episode of the second season of A Discovery of Witches. It is also the fifteenth episode overall in the series.

Matthew and Diana arrive in Bohemia to search for the Book of Life. They meet Emperor Rudolf II, who immediately expresses a lascivious interest in Diana. Matthew displays protective jealousy and is pushed to the edge.[2]

In Bohemia 1591, Diana and Matthew make it across the rolling hills to the castle nestled amidst monstrous mountains. Unlike Philippe, the greeting from Rudolf is less than welcoming. Eventually they’re brought into the Emperor’s hunting lodge for a brief audience with this disgruntled King.

There, Matthew questions Rudolf about Edward Kelley. Rudolph claims he’s in Prague but Matthew is not so sure. When Diana speaks up and mentions alchemy, it seems to do the trick and piques his interest. As he kisses her hand, Matthew introduces Diana as his wife.

After this meeting, Gallowglass greets the pair and immediately senses that Matthew and Diana have mated. Jack is there too, along with Francoise, but Matthew is not happy that Jack has been endangered. As a result, Matthew and Diana start to disagree about the best way of approaching Rudolf and Kelley, with Diana believing she should use this opportunity to grow closer to Rudolf.

Diana and Gallowglass seek council with the King while Matthew and Pierre go hunting for signs of Kelley. While Diana waits in a long line for an audience, Gallowglass goes on ahead in an attempt to speed things up. A passing vampire introduces himself to Diana as Benjamin Fuchs. When asked about the De Clermonts, Benjamin claims to be beneath their notice and says he was cast out by his own clan.

Matthew suspects that Kelley is being kept in secret somewhere around the castle and visits the apothecary, where Kelley might find the equipment needed for his alchemical experiments. After discovering Kelley on the schedule under a code name, Matthew finds him with a couple of guards, but his cryptic speech ends with him telling Matthew that it begins with “a discovery of witches”.

Diana eventually gains access to Rudolf thanks to Gallowglass. She gives Rudolf the book from Dee as a gift, but it’s not what he wants. Instead, Rudolf shows her his kunstkammer, a collection of trinkets he’s gained on his travels. He introduces her to Rabbi Loew, whom he has consulted for his great esoteric knowledge. Diana tries to goad Rudolf into a confession by mentioning the Philosopher’s Stone but he doesn’t sway.

The next day, Matthew and Diana meet with the Rabbi, believing they can trust him. They mention the Book of Life and it turns out he’s definitely seen it. Rudolf let him view it but the man wasn’t able to read it. Diana receives an invitation to hunt with Rudolf and Matthew decides to join them, giving Gallowglass time to search for the Book.

Outside, Diana and Rudolf continue to talk while the latter intentionally winds up Matthew. Until Matthew’s bird breaks Rudolf’s that is. Forced back into the castle, Diana and Matthew catch up with Gallowglass and learn that the Book wasn’t in Rudolf’s study.

Instead, Gallowglass found a severed hand that belonged to a witch, surrounded by bits of other creatures. It’s an ominous warning and one that sees Matthew lose control and struggle to keep his urges at bay. Given he and Diana are now joined together, Matthew is struggling to control his blood rage.

Thankfully, Diana gets through to him, and just in time to be summoned to the King to view the kunstkammer. Believing this is just the ticket they need to get in and out with the book, Matthew tasks Pierre to get the horses and the others ready for the evening as they’ll be leaving in a hurry.

Unfortunately, things quickly go awry when the Rabbi is publicly denounced by Rudolf as having exaggerated his own abilities. Rudolf further accuses Diana of being a spy and a charlatan. Diana loses her temper and conjures a snake on Rudolf’s hand. Shocked, he eventually submits and promises to show them the Book.

Deep underground, Rudolf reveals Edward Kelley, who’s rocking on the spot. Diana uses her powers to pry the Book from his grasp and immediately opens it up, conjuring that same Rowan Tree we’ve been seeing so much of.

Fighting inevitably breaks out when Rudolf decides to take in Diana for himself, and Kelley tears out the pages that are missing in the future. With the damaged Book in their clutches, Diana and Matthew escape Rudolf’s castle and flee.

Back in Rudolf's underground prison, the vampire Benjamin kills a guard and approaches Kelley menacingly. 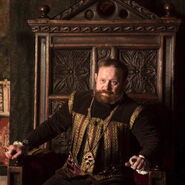 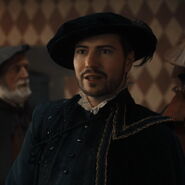 Retrieved from "https://allsoulstrilogy.fandom.com/wiki/Episode_7_(Season_2)?oldid=8473"
Community content is available under CC-BY-SA unless otherwise noted.