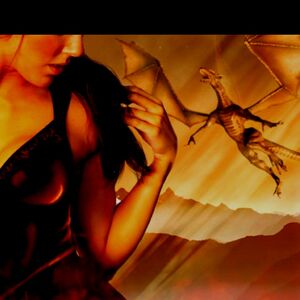 Diana's familiar is a firedrake called Corra. Corra's eyes are black, with silver irises. She has two legs, which makes her a creature of water in addition to fire. Sometimes she appears solid flesh and sometimes a blur of smoke.

She helps Diana disguise the shimmer sometimes emanating from Diana's skin that might alert others that she is a powerful witch. She usually stays out of sight curled around Diana's ribs, but likes to fly and play also. She protects Diana and her pregnant belly when Diana is threatened physically.

A Discovery of Witches[edit | edit source]

The Book of Life[edit | edit source]

Corra appears again flying around Sept Tours ceaselessly and damaging some of Ysabeau's belongings. Gallowglass continues attempting to keep Corra under control, but to no avail.

Retrieved from "https://allsoulstrilogy.fandom.com/wiki/Firedrake?oldid=4691"
Community content is available under CC-BY-SA unless otherwise noted.