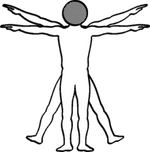 Humans in the All Souls Trilogy are one of the four humanoid races. Humans usually are unaware of the existence of vampires, witches and daemons in the world. Those who are aware of them may be afraid of them, or may becomes allies with them. Humans are a larger percentage of the world's population in comparison with creatures than was earlier the case. They can be reborn as vampires or can sometimes have children who are daemons.

Retrieved from "https://allsoulstrilogy.fandom.com/wiki/Humans?oldid=6833"
Community content is available under CC-BY-SA unless otherwise noted.