This article is a stub. You can help All Souls Trilogy Wiki by expanding it. 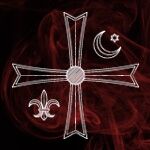 The Military and Hospitaller Order of Saint Lazarus of Jerusalem (Ordo Militaris et Hospitalis Sancti Lazari Hierosolymitani), better known as the Knights of Lazarus, is an order of chivalry originally founded at a leper hospital after 1098 by the crusaders of the Latin Kingdom of Jerusalem. It was established to treat leprosy, its knights originally being lepers themselves. It is possible that king Baldwin IV of Jerusalem was a knight of this order or was, at least, assisted by it. The symbol of the Order is a green eight-pointed Maltese Cross. It is believed to have given rise to the use of the green cross as the universal symbol for retail pharmacies worldwide. The word lazarette, in some languages being synonymous with hospital, is believed to also be derived from the hospitaller Order of St Lazarus. After several centuries, the order went into decline and ceased to perform its original function. Starting with Pope Innocent VIII, attempts were made to merge it with the Knights of St. John. Eventually the order in Italy was merged with the Order of St. Maurice and in France with the Order of Our Lady of Mount Carmel. Several branches of the revived Order now claim to be the continuation of the old Order, a claim disputed by some experts and supported by others.

In A Discovery of Witches, Diana discovers Matthew's involvement in the Order when she is looking in his desk and accidentally finds a hidden drawer filled with seals. In Shadow of Night, Matthew reveals that he is the head of the Order since the death of his father, Philippe de Clermont.