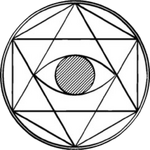 Witches are one of the four types of species in the world of the All Souls Trilogy. Among them are humans, vampires, and daemons.

In addition, it is said that witches’ bonds to their family and that their local covens are important. They are rooted in their communities and have a deep sense of place. Witches have a wide variety of powers, some are spellcasters, some have elemental powers, but they all have strong personalities and are non-conformists at heart.

Witches vary in their magical abilities and strengths, including time walking, precognition, flight, transmogrification, telekinesis, witchwind, witchfire, witchwater, and manipulation of the elements. A very few witches are weavers, who can create new spells. Some spells created by weavers cannot be written as simple words for other witches to use, but can only be used by the spells' maker. Weavers make a forespell, revealing the shape of their talents, and often the weaver's familiar too. Weavers have been forced into hiding, since other witches have feared their power. The first witch may have been a weaver.

Biologically, what separates Witches and Humans is a 24th Chromosome pair, something they share in common with Vampires. This Chromosome pair along with their Mitochondrial DNA, which is separate from chromosome DNA, can contain genetic markers that correspond to a specific power or ability with specific genes known to cause elemental abilities like Water, Fire and Air as well as unique or inherited abilities like Weaving, Time Walking and being a Seer.

A History of Witches:[]

Since prehistoric times, witches have coexisted with humanity. They appear to be an humans offshoot species of humans, or rather a higher, more evolved species of humans. What distinguishes Witches and humans their DNA (Witches have a 24th Chromosome pair) and their ability to harness magic. However, because of this power, they have been a continual target for oppression. Witches have been persecuted throughout history, and if they weren't being persicuted they would be shunned and hated by the majority of humans. Witch hunts were frequently fruitless, owing to the fact that witches frequently eluded arrest by warding themselves or instantly dispatching their oppressors with magic. Most alleged witches were most likely humans and daemons who were fell under the scrutiny of their peers for being out of place in their communites.